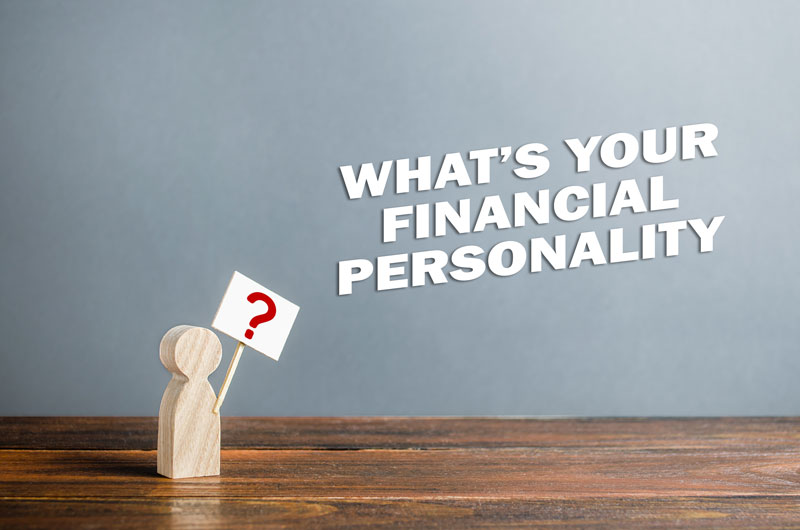 When it comes to money, where do your dollars lie?

Savers: Those who save now so they can enjoy their money later. Savers are debt-averse; they pay off their mortgage early.

Spenders: People who want to enjoy their money now and worry about the future later. They don’t save much and tend to borrow.

Sharers: Those who want to share their money with family, friends, charities, or their community. Sharers tend to compromise their spending, so everyone gets a little.

How open are you to new ideas?

Aggressive: These Type A personalities seek advice from experts regarding their wealth. They know how much money they have, what they spend, and why. Their competitive nature means they may ignore financial needs or markets in their decision making. They may be too hawkish, overlooking the need sometimes to preserve, not grow, assets.

Technical: These people just want data. They make decisions based solely on quantitative information, which can become overwhelming for them at times. They’re interested in investments that show growth over the short term.

Affable: These personalities just want to chat but may follow advice to be liked or be popular. They often don’t know how to budget or write a check and may want to explore some wilder investments.

Amenable: These people are not decision-makers and need guidance. They’re generally not aggressive or proactive in their approach and tend to keep money in cash because it’s easy.

Financial habits and beliefs often begin in childhood or early adolescence, formed by imitating or rejecting examples set by parents about money. But other people and factors, such as education, social expectations, and economic conditions, may influence your financial personality over time, according to an article by the Australian Journal of Education.

This document is for educational purposes only and should not be construed as legal or tax advice. One should consult a legal or tax professional regarding their own personal situation. Any comments regarding safe and secure investments and guaranteed income streams refer only to fixed insurance products offered by an insurance company. They do not refer in any way to securities or investment advisory products Insurance policy applications are vetted through an underwriting process set forth by the issuing insurance company. Some applications may not be accepted based upon adverse underwriting results. Death benefit payouts are based upon the claims paying ability of the issuing insurance company. The firm providing this document is not affiliated with the Social Security Administration or any other government entity.

We’d Love to Help You With Your Financial Plan